Due to the ongoing situation with COVID-19, there will be no Spring hackathon this year. We are looking into the possibility of doing a remote/virtual hackathon, and discussing plans for the release of Gerrit 3.2 which would have been done during the hackathon.

A new page that lists all Gerrit plugins has been added to the homepage. Beside listing the plugins known to the project, that page shows the current compatibility status of each plugin towards every supported Gerrit version. The page gets updated at least daily, which makes its CI build status for each plugin and version fairly current.

This new page is reachable from the Code top menu, selecting Plugins.

There is an initial framework based on Gatling, to start implementing end-to-end (e2e) tests. Initially meant for load testing, the framework started to support functional e2e test scenarios, reusing that stack further.

The GerritForge team, who originally introduced the framework for Gerrit, have been using load test scenarios for the high-availability and multi-site plugins, as well as to validate the Gerrit 3.1 release. Other community members are as welcome to start using the framework, for either load or functional e2e test purposes. The documentation explains the test scope differences in Gerrit, and how to use the framework where the e2e scopes apply.

Beside core, Gerrit plugins can now start reusing that framework in turn. Initial yet basic functional scenarios were recently introduced for the high-availability and multi-site plugins. It is currently likely that more will come, as internal e2e test suites become open-sourced (thus reusable) that way.

Development of the ‘Revert Submission’ feature has completed, and it is now live on gerrit-review. See more about this feature in the design document.

When posting robot comments, suggestions for a fix can be directly attached to it. This feature has been present in Gerrit for some years. However, those fixes weren’t shown on Gerrit’s UI. This has changed. Robot comments now have a Show fix button when at least one fix is available for them.

The button opens a dialog indicating how the fix would modify the code. 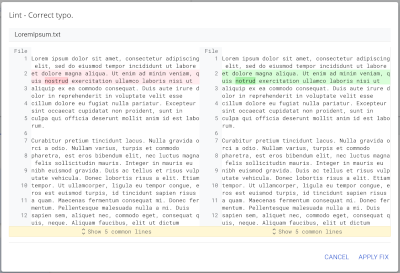 If several fixes are present, users can switch between them and use Apply fix on the one they prefer. The code modifications will end up in a change edit which can be further adjusted before being published.

The Findings tab next to the Files section gives an overview of and quick access to all robot comments on a patch set.

Frontend development has moved from Bower to NPM, and from HTML to JS for imports.